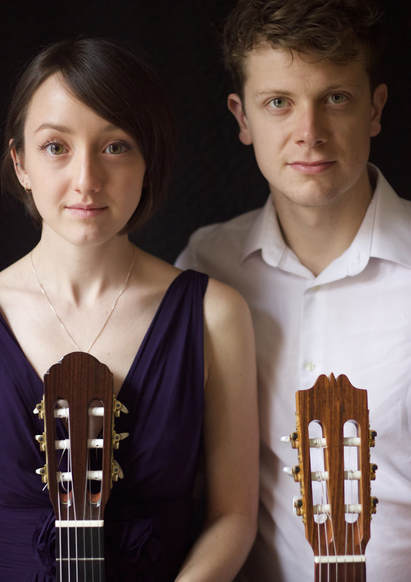 The Roth Guitar Duo formed through a shared love of chamber music in 2014, whilst studying at the Royal Northern College of Music. The duo have played at venues and festivals throughout the U.K. including: St-Martin-in-the-Fields, Buxton Pavilion Arts Centre, Cardiff Guitar Festival, Nanpantan Festival and Ribfest. The duo have been invited, on many occasions, to perform at Manchester’s Bridgewater Hall for concert series such as A Little Bite Music, Dig the City Festival, Craig Ogden’s Big Guitar Weekend and Bridgewater Introducing, which gives up and coming artists the opportunity to perform at the prestigious venue. The duo were recently awarded Second Prize in the ENKOR International Music Competition. Sam and Emma always strive to create interesting and varied programmes of interest to any music lover, ranging from Renaissance to newly commissioned and unpublished works.

Sam Rodwell completed his undergraduate at The Royal Northern College of Music in Manchester with a first class honours degree under the tutelage of Craig Ogden. Sam went on to complete his Masters in performance also at the RNCM with a distinction and was then employed by the university as an associate guitar teacher.  In his very first term as an undergraduate he won the String Department 'Salon Prize' making him the first guitarist to win this competition for nearly 30 years. Also during his first year at music college Sam was offered the opportunity to perform on guitar, banjo and ukulele in Shostakovich's rarely performed ‘Paradise Moscow’. In his fourth year he went on to attain a place as a finalist in the highly prestigious ‘Gold Medal’ competition. He has similarly appeared as a finalist in the Ivor Mairants Guitar Competition and The Royal Overseas League strings sectional.
Sam has given many recitals in some of the most recognised concert halls in the U.K. including a solo performance for 1500 people at the De Montford Hall (Leicester), St Martins-in-the-Fields, Bridgewater Hall, RNCM Concert Hall, Buxton Pavilion and many more. He has also featured at many festivals including the 'World Saxophone Congress' in Zagreb, Croatia, where he premiered a new work with his Saxophone and guitar duo (Duo Antipodes), a solo recital at 'Hellys international Guitar Festival', The Cardiff Guitar Festival, Craig Ogden's Big Guitar Weekend, Winchester Festival, World Youth Guitar Festival and RibFest.  In 2016 he made his television debut on Sky Arts whilst taking part in ‘Guitar Star’ making it to the final 8 and being featured in 6 out of 9 episodes. Sam has also been an ambassador for Yamaha (U.K.) in promoting their classical guitar range. He has performed in masterclasses for artists including David Russell, Mark Ashford, Chris Stell, Milos Karadaglic, Gary Ryan, Michael Lewin, Gordon Crosskey and Julian Byzantine.
Sam's love of chamber music has led him to perform with many different ensembles, covering repertoire from the renaissance to the 21st century. He has had notable success performing many concerts with the ‘Roth Guitar Duo’ with Emma Smith. Sam has performed with a number of British orchestras, including the Manchester Camerata featuring a performance with the world famous accordionist Martynas Levickis.
Sam plays a 2006 Christopher Dean guitar.

Emma Smith
Emma recently graduated from the Royal Northern College of Music where she gained a Master of Music (Solo Performance) and a PgDip (Solo Performance), studying with Craig Ogden. She completed her BMus (Hons) at The Ian Tomlin School of Music, part of Edinburgh Napier University, under the tutelage of Simon Thacker.
Emma is a dedicated and experienced chamber musician and has twice won the Rita Quinney Medal for ensembles in the Edinburgh Festival of Music and Speech, in 2010 in duo with violin and in 2011 with the Edinburgh Napier Guitar Quartet. She was invited to play in the prize-winner's concert at The Queens Hall in Edinburgh on both occasions. Emma has performed at many other venues in Scotland including the National Galleries, the Queens Hall, Edinburgh Castle, St Giles Cathedral and for the Edinburgh Society of Musicians and Haddington Concerts Society.
Since moving to Manchester Emma has performed both solo and chamber music recitals throughout the U.K. in venues such as St Martin-in-the-Fields, The Bridgewater Hall, The Pavilion Arts Centre and for Lake District Summer Music, Buxton Festival, Cardiff Guitar Festival, Nanpantan Festival and Ribfest. Emma recently gave a solo recital at Manchester’s Bridgewater Hall as part of their Bridgewater Introducing series, which allows emerging artists to demonstrate their talent and share their music with a wider audience.
She has performed in masterclasses with guitarists including Gerald Garcia, Carlos Bonell, Mark Ashford, Robert Brightmore, Chris Stell, Paul Galbraith, Julian Byzantine, Edoardo Catemario, Elena Papandreou, Gary Ryan and the Aquarelle Guitar Quartet.
Emma is the recipient of awards from The Cross Trust, Mirium Gunn Musical Award, The Hope Scott Trust and The Sir James Caird Travelling Scholarship Trust and was awarded the Ian Spencer Fox Guitar Bursary from the RNCM